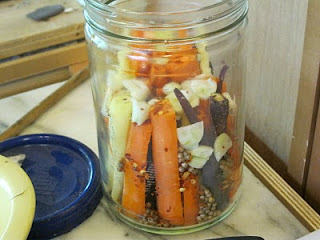 I made these a while ago, but they're just coming into their eating prime. The picture is from before I added vinegar because it's prettier.

Take two pounds of carrots- it's suggested to use a variety of colors, but I used red ones and now the whole thing is blood red. Peel and remove ends. If thick, quarter. Simmer 1 cup cider vinegar, 1 cup water, 1 tbs salt, and 2 tbs sugar over medium heat until the solids dissolve. Add eightish peeled garlic cloves, slightly crushed, and 1 tsp cumin or coriander seeds.. Stuff the carrots into a very clean 1 quart jar, and pour in the vinegar mixture. Cover the jar, store in the refrigerator for four weeks.

(To sterilize the jars, you can boil them, or boil the lids and put a half-inch of water in the jars and microwave them for a minute.)

These are good in sandwiches, maki, weird Sarah salads, and probably a whole slew of other things.
Posted by Janeric at 7:44 PM No comments: 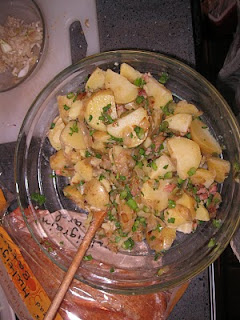 This is a sorry excuse for a vegan recipe- being as it required the suffering of three different species. Happily, my mother informs me that it's also a sorry excuse for German potato salad. According to her every potato chunk should be coated with an acrid gloss of roofing tar- or a roux made with bacon fat and cider vinegar and whole wheat flour. Regardless of cultural accuracy or following the sentiments of this blog, it's pretty good potato salad. It has no mayo, if that's a thing. Also, it's what I'm having for lunch this week, so stop whining.

I will be giving my Midwestern recipes extra leeway, because I can think of about three dishes that are perfectly vegan. They are all pickles.

Dice two onions, and caramelize them in 1 tbsp butter, lard, or for those of us without seven generations of German grandmothers hissing in our prefrontal cortexes some sort of vegetable oil. This will take a while- that's why one does it first. At some point you may find the onion pan to be dry- add more fat and make sure the heat is nice and low. Cut 10 Yukon Gold or other waxy potatoes (the red ones or the white ones or the purple ones)in half, and boil them until fork tender.

Chop 4 stems of celery, a good handful of parsley, and cucumber pickles. The total amount of chopped pickle should be half the amount of chopped celery. You should use dill pickles, but I'll still be your friend if you use bread and butter. Or non-cucumber pickles, actually. Hell, I still love C, and the man hates pickles. I've gotta find some with Yellow #5. Put the chopped vegetables into a large bowl. Oh, and dice one slice of bacon.

You'll probably finish chopping long before the onions turn properly brown and the potatoes become edible. Do some dishes or something.

When the potatoes finish, cut them into thick slices and put them in the bowl. Add the onions. Take the old onion pan, turn the heat up to medium high, and fry the bacon until crisp. Keep stirring, or it will burn and you will be sad. This is where you'd make a roux if you were bound by tradition, but we already silenced those demons with lard earlier. We are strong. Instead, add one tbsp of mustard, (not French's, fools) 1/3 cup of cider vinegar, 1 tsp sugar, 1/8 cup of olive oil, and 1/3 cup chicken broth. (The secret to great vegan cooking is homemade chicken broth.) Turn the burner off, stir until blended. Pour over the vegetables, mix everything together. Chill.

This should be a little on the acid side, because I was raised on acrid roofing tar potato salad, so you may want to hold back on the vinegar at first. Or to be more accurate, I added sauce ingredients until it tasted right instead of measuring, and too much vinegar is the only thing likely to make the final product inedible. If the balance is off, add things until it tastes good. This holds up very well in a backpack- though that might be in contrast to my memories of dubious mayonnaise based potato salads. 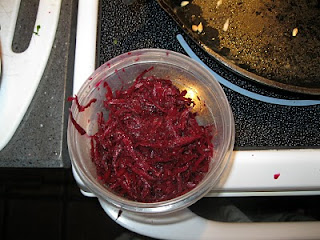 My excuse for not going live earlier? June. Work has been... June.

I like to have a little salad in my lunch- my parents aren't crazed vegetable eaters, and it's a good way to get an extra serving in. This week, it's going to be beet salad, because I live in the middle of nowhere and being seasonal is difficult.

Crap, the farmer's market is going on right now. Be right back.

Hey, there were beets there! Justified! (Like most lunch items, serves me for four days.)

So grate two raw beets. This will leave you with a lot of grated beet. Make a quick vinaigrette by blending 1 tsp Dijon mustard (I like Inglehoffer)with 1/8 cup red wine vinegar and 1/4 cup olive oil. (Salad quality oil, whatever that means for you.) Add salt and pepper to taste, pour over grated beets. Taste. Adjust. Put in Tupperware so it can sit in a hot backpack for five hours.