Rice Cooker Adaptations for Other Recipes

Rice cookers are wonderful appliances. The fuzzy logic switches stop things from cooking whenever the temperature goes over boiling- so it's nearly impossible to burn things. Since I've burned dry beans approximately seven million times this is wonderful. They're also safe to leave running alone and use a fraction of the power or gas that a burner does. I often leave the bean cooking part of a recipe cooking in the morning, and then return to add the final touches to the recipe. It's easy! It's cheap! It makes beans a reliable last minute meal! It's magical!

I should be getting paid to shill these.

The Moros and Cristianos recipe- black beans and rice cooked together- can be modified thusly: Cook one cup of black beans in the rice cooker with four cups of water for about an hour. (It might be more like an hour and a half.) When the beans are tender, add 1 cup of short grain brown rice and 1 and 3/4 cups water and cook again. (If you're using other rice, add a cup of that and as much water as your rice cooker recommends.) When it switches off, taste it. If something's not done, add another half cup of water and run the cooker again. The original recipe involved a mire poix and hours of simmering- now I usually garnish this with some kind of salsa cruda and an egg and call it dinner. (Serves two adults with a leftover breakfast. Adjust recipe accordingly.)

When I wrote the recipe for Annapurna dal, I complained that I took terrible photos. I haven't improved. Some things have changed: I'm now convinced that mung beans make the best dal- the very best- although lentils are fine too. I put a cup of legume into the rice cooker, I add several cups of water, and I wait about half an hour. While waiting, I chop an onion and saute it over low heat with half a teaspoon of salt and a good glug of oil. Near the end, I add half a teaspoon of curry powder and half a teaspoon of cumin. (One could caramelize five or six onions, and then keep them in the fridge for super simple- rice cooker only meals.) I mix everything together. There's no need to puree it, because things will handily reduce themselves to sludge. I eat it with leftover brown rice, yogurt, or lime pickles. (I have yet to learn to make these lime pickles) I often throw frozen or fresh broccoli into the steamer basket for five of the minutes that the beans are cooking. (Not the last five, because then I miscalculate and the broccoli turns to mush.)

Here are other rice cooker bean recipes that don't require adaptation: Chilean lentil soup and hummus.
Posted by Janeric at 7:59 PM No comments:

Mix equal parts white miso and soft butter. Add it to all of the things. (About a tablespoon of each should be fine for a pound of produce. You know I believe that animal fats are fine in pursuit of eating leaves.)

Roast brussels sprouts are particularly good. So is fresh corn. Broccoli. Blanched kale. Sweet potatoes Or if you want to thicken a sauce, whisk this in at the end.
Posted by Janeric at 7:52 PM No comments: 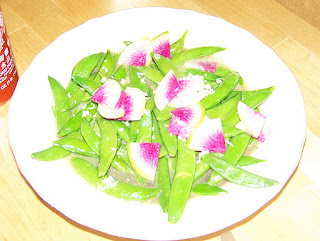 The wasabi pea snack is gross. I don't know why I had high hopes for a dish based on the snack- but I did! Look how washed out the photo is- washed out like my failed dreams.

Note the quick watermelon radish pickles from the last post.

Basically, one tosses a pound of snap peas in a cup of hot broth and a tablespoon each of soy sauce and butter. When the peas are warm through, they are done.

This part of the dish is fantastic. It could use a little bit more salt, but if you deploy the radish pickles, you have litle salt bombs spread throughout. Do that. Serve that.

Do not invest a lot of time in hunting down horseradish. (Because the wasabi on peas is actually horseradish, and it's basically a clever conceit dish.) When you do hunt down horseradish, and the smallest root weights a pound and a half, don't buy it. When you buy it, wash and peel it before grating it over the dish. If you grate it, don't keep grating until the flavor is obvious.

Next up, I find things to do with my seventeen pounds of fresh horseradish.
Posted by Janeric at 5:44 PM No comments: 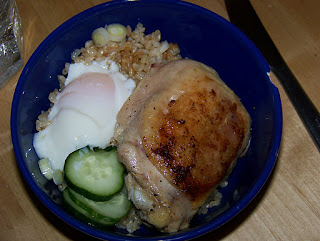 The photo of these pickles looked far too similar to my mirin pickles. As 40% of what I actually cook is a bowl of rice with things on top of it, I figure it's time you realize that I eat a.) chicken and b.) not all that many pickles at once. It's also time that I realize that I can buy less than five pounds of any sort of produce.

Thinly slice about half a cup of cucumbers (wash if waxed) or watermelon radishes or daikon. Mix with a tablespoon of sugar and a tablespoon of kosher salt. Let sit for ten minutes. Serve.
Posted by Janeric at 5:30 PM No comments: 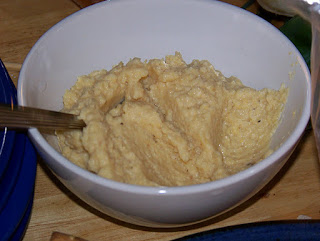 Hummus intimidates me. My lovely former roommate (Hi A! I'm totally going to talk shit about your hummus!) used to make hummus. It was... not great? And somehow, no matter how few garbanzo beans she'd start soaking, there would always be a half gallon of hummus when she finished making it. It would eventually go bad. We'd eat it until it was obviously obviously bad, and then she'd make more. (Spoiled hummus tastes sparkley. Or it has blue fuzz.)

We were quite broke, and some of her relatives had given us ten pounds of dry garbanzo beans. Also, we had all of this disgusting bread.

So hummus intimidates me. However, I got my darling brother a rice cooker for holidays, and he expressed interest in cooking beans for hummus. I said I'd figure it out for him and then he could visit this blog and wish I had a copy editor.

Remember how I insulted A's hummus like two paragraphs ago? Did you think that I'd follow up by using a different hummus recipe? That's what the weak do, readers. I went ahead and used the exact same recipe and it was delicious. I have theories as to why.

1.) There was something wrong with the free garbanzos. It's unlikely that ordinary garbanzos octuple in size during the cooking process.
2.) My decade-old memory is fallible. The hummus was always delightful.
3.) An endlessly replenishing half gallon of any sandwich spread will eventually become disgusting.
4.) I'd always pressure her into including tahini. Tahini is possibly disgusting.
5.) Using a cheap and terrible blender is a bad idea. Food processors are better.
6.) I've learned to sneer at Laurel's suggestions about salt and seasonings.
7.) Look, the beans, the oil, and the garlic were scavenged. It's likely that at least one of them had spoiled.

Keep all of that in mind.

Take one cup of dry garbanzo beans, and soak them in cold water for at least five hours. (Or overnight) Discard the water, rinse the beans, and fill the rice cooker with five cups of water and the beans. Cook for about three hours, replenishing water as needed. Cook until beans are tender. (The beans may be old. Then, they will not become tender, even after four hours of cooking. Throw them away. Cry. Harangue your grocer.)

Peel three cloves of garlic (I don't actually know how much garlic is a good idea. I know six cloves is too much. Use less than six.) Throw them into the food processor with 1 tsp salt and 1/4 cup vegetable oil. (If you used canned beans instead of playing with the rice cooker, don't add the salt. If you used the rice cooker, you might have to add a lot more salt. Also, I used to be obsessive about using olive oil here. I made it with safflower oil because I was pretty sure this was a test run, and it was good. Go ahead, be cheap.) Puree that stuff. (Oh my, more notes. If you want to add 1/2 cup tahini, do it here. Or use a half cup of peanut butter! Or almond butter! Increase the rib sticking properties!)

Drain the garbanzos and add to the food processor. Puree the heck out of it. Make it as smooth as possible. Squeeze in the juice of 1/2 lemon. Taste. Add pepper, salt, and lemon to taste. You might have to add a lot of salt.

Makes about 3 cups, or about... six pitas? Enough. Don't go doubling this for no reason, guys. Make it once first.
Posted by Janeric at 4:02 PM 3 comments: 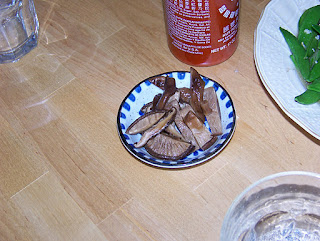 It's the tiniest bowl of shiitake pickles! I should have taken the extra ten seconds to mess with the zoom instead of dropping the camera and stuffing them into my face.

C bought me the Momofuku cookbook for Christmas (yay!) and it's seriously damaged my interest in vegan food. It's full of recipes that could convert vegans via smell alone. Those recipes generate a great deal of pork fat, and C allows me to have only two jars of fat hiding in the fridge at one time. Guys, it's hard! Hard!

But I'm made some pretty decent vegan dishes purely by chance. I guess I'll share them with you.
Posted by Janeric at 3:20 PM No comments: