Popcorn is Totally a Meal! 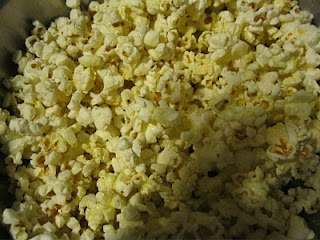 The mid-sentence caps in the title give it unnecessary gravitas.
Popcorn is technically a whole grain. This means that sprinkling popcorn with lemon, olive oil, and nutritional yeast is technically a healthy lunch.
Posted by Janeric at 9:20 PM No comments: 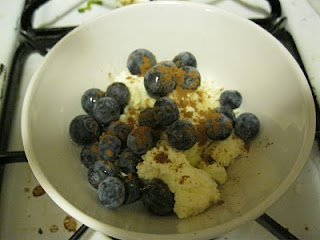 The milk sometimes starts to go bad before we drink it all. This didn't happen when we drank conventional milk, and it wouldn't happen if my husband didn't reject the milkfat percentages available in smaller cartons.
Someday, after the fall, I will read this post and hate myself. Look at those out-of-season blueberries, future self. They were a dollar. I served them with agave nectar and a sprinkle of cocoa powder.
Hey, at least you still have electricity... And ricotta cheese is always delightful, right? No matter what?
Take six parts almost-bad milk and one part cream. (Milk is almost-bad when it tastes fine, but then five minutes later your mouth tastes like sour milk.) Heat it gently until it is boiling softly. Add two tbs lemon juice for every three cups of milk. Stir vigorously until it separates into curds and whey. Appetizing, right?
Line a colander with several layers of cheesecloth or two layers of paper towels. Place colander in a slightly larger bowl. Gradually pour the curds and whey into the colander, occasionally pouring whey out of the bowl as needed.
Allow to sit for about an hour, and then remove the drained whey. Put the ricotta into a bowl and refrigerate, covered, for up to four days.
Six cups of milk makes just over a cup and a half of cheese.
Posted by Janeric at 7:05 PM No comments:

Labels: not really vegan, ricotta, solutions to problems that aren't common yet 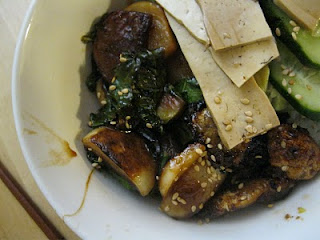 The other stuff in the photo is pickles, tofu, toasted sesame seeds, and rice. Serves two.
Cut one small turnip and three watermelon radishes (fine, yes, six regular radishes) into 1/3 inch thick slices. Destem and coarsely chop four chard leaves.
Fry the turnip and radishes in 1 tbs. oil until slightly tender. Stir frequently. Add 1 tbs. honey and stir. Add 1 tsp. soy sauce and stir. Add the chopped chard and stir. Add the juice of 1/2 lemon and stir. Turn off burner and allow chard to wilt.
Take eight small mushrooms, remove caps, and brush clean. (If you have large mushrooms, use six and break them in half.) Put half a dozen smashed rice crackers or three tablespoons bread crumbs onto a plate. Mix 1 tsp honey and 1 tsp water. Dip mushrooms into honey mix and roll in crumbs until coated.
Heat 3 tbs oil in a small pan. Add coated mushrooms, and fry until crisp- about 3 minutes.
Eat.
Posted by Janeric at 2:59 PM No comments: 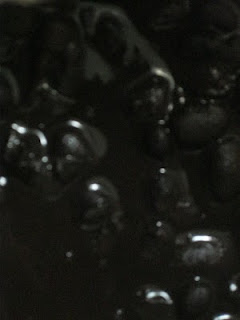 I think this picture looks menacing.
This is an adaptation of how my mother makes black beans; she adds the orange from the beginning, but we don't do that because adding acid to uncooked beans results in tough skins and fire rain.
Pick over two cups black beans. Put in a pot with lots of water- like six cups- and a bay leaf, 1/4 tsp oregano, and maybe a little espazote. Simmer gently for 1 and 1/2 hours, or until tender. Add additional water as necessary to maintain a soupy texture.
An aside about beans: most types of beans take 2.5-3 hours to achieve tenderness. Black bean take less time. You could give them another half hour, but if they aren't tender by then, you have old beans. They will never become tender. Give up and order take-out instead. Throw away the rest of the beans you bought.
Also, beans are done when one blows on them and the skins crack and peel back a bit.
Right. Muddle the beans a little- smash a few of them to give the broth heft. (A few being about 1/4 cup. No need to get carried away.) Slice in half one or two oranges. Juice all but one of the halves and add the juice to the beans. Toss the remaining unsqueezed half into the beans and simmer for another half hour.
Oh, you could add some chiles here. I'd go for something with a lovely floral note such as a habenero. Señor C does not agree. My mother adds half a cup of red wine and puts the chile peppers in other parts of the meal
If done correctly, the pectin in the orange pith produce a bean dish that resembles pahoehoe. The texture is almost satiny. Also, it tastes like oranges and orange oil.
Serve with rice and salsa. I like to pretend it's Cuban, and serve with unripe banana salsa and chopped hard boiled egg.
Posted by Janeric at 12:08 AM No comments: 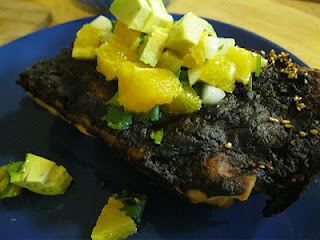 I saw that Bus Reader and spouse had made potato tacos- this sounded like a lovely idea. I stole it and made enchiladas instead.
Preheat oven to 350 degrees.
Wash and peel one pound of potatoes- I used Russet. If you have access to those very starchy Japanese sweet potatoes, you could use those. Simmer until tender, about 15 minutes. Cut into bite sized pieces. Season with salt and 1 tsp. cumin.
Thin about 1/2 cup mole (the kind with poblano peppers and chocolate) with 2-3 cups of water or broth. Mix water in gradually to make a smooth sauce. Simmer over low heat briefly to combine.
Toast about 1/2 cup slivered almonds and 1/2 cup sunflower seeds over medium heat in a dry pan. Chop 1/2 cup cilantro.
Heat about 16 corn tortillas until soft- about 3 minutes in the microwave. Oil the bottom of a 16x9 inch Pyrex dish. Wrap cilantro, almonds, sunflower seeds, and potatoes in tortillas, and arrange in dish until tightly packed.
Other optional ingredients include 1/4 cup currents, 2 cups black beans, chopped onion, caramelized onion, and shredded chicken.
Top enchiladas with mole. Bake for 30 minutes. Toast 2 tbs. sesame seeds as a garnish.
Serve with orange salsa. You know what else would be good? Sour cream.
This resolves a long-standing debate with C about enchiladas. Enchiladas are soggy starch and melted cheese in a Pyrex dish and thus manna. Sadly, they are apparently too spicy. Early in our relationship we had a rather pointed discussion about the origin of the word "enchilada". I believe I said some vulgar things. This recipe fixes that problem: the chiles remain, but the heat is mostly absent.
Posted by Janeric at 12:12 AM 3 comments:

I have a picture of this on my camera, but my camera is buried in the clutter drifts in the living room. Since I am writing this post specifically to avoid decluttering, it's another picture free post.
My friend was telling me about a "really great pasta recipe". It started out wonderfully, and then continued by adding more and more expensive and dominating ingredients. I can't see the end result being anything other than a mish-mash of flavors and textures. Here's the first few steps- I tested them, and they are delightful.
Remove the outer leaves and the green ends from two large or five small leeks (about 1 pound). Wash- particularly at the top end, where dirt is common- and slice into thin rounds. Chop 1/2 onion.
Saute leeks and onion in a large pan, over medium heat, in 2 tbs. olive oil until soft and slightly caramelized; about 10 minutes. (Preposition overload!) Sprinkle with 2 pinches salt (what a horrifically twee phrase. Still: two pinches.) so that the vegetables bleed a little. Turn the heat to medium-high for the last minute. Delectable brown crusts should form on the bottom.
Cook 1/2 pound pasta- linguine for preference- and drain. Mix the leeks and the pasta in a large bowl. Return the pan to heat, and deglaze with one cup white wine. (Deglaze means add liquid while stirring a lot so that the good bits on the bottom get dislodged.) Add the wine sauce to the pasta bowl, stir and serve.
There's no protein in this, so it is merely a side dish. Beware, beware, etc.
What, you want to know what the extended version includes? Reserve the leek mixture and deglaze with wine as stated. Add the leeks back and stir in 1 can artichoke hearts, 1 tbs hot pepper flakes, 1/2 cup chopped Kalamata olives, 1/2 pound chopped pepperoni, about eight cloves of chopped garlic, and a 16 oz. can of tomato sauce. Serve over pasta with lots of Parmesan cheese.
Posted by Janeric at 1:39 PM No comments: