I've been making Choire's excellent tarte tatin at least once a week: it's absurdly easy, and a half recipe is basically the perfect size dessert for four.  I've been trying to think of other things that would adapt well to being cooked in caramel and then baked.  Pomegranates and raspberries are too fragile, plums and peaches are not friends with caramel, quince and pears are not distinguishable from the traditional apple tarte tatin.  Then yesterday I paused, pipette in hand: pumpkin.  Pumpkin tarte tatin. Pumpkin tarte tatin, in time for the Thanksgiving blog resurrection. The idea glowed before me: it was even a Thursday.  Bad Idea Fridays are BACK, baby. 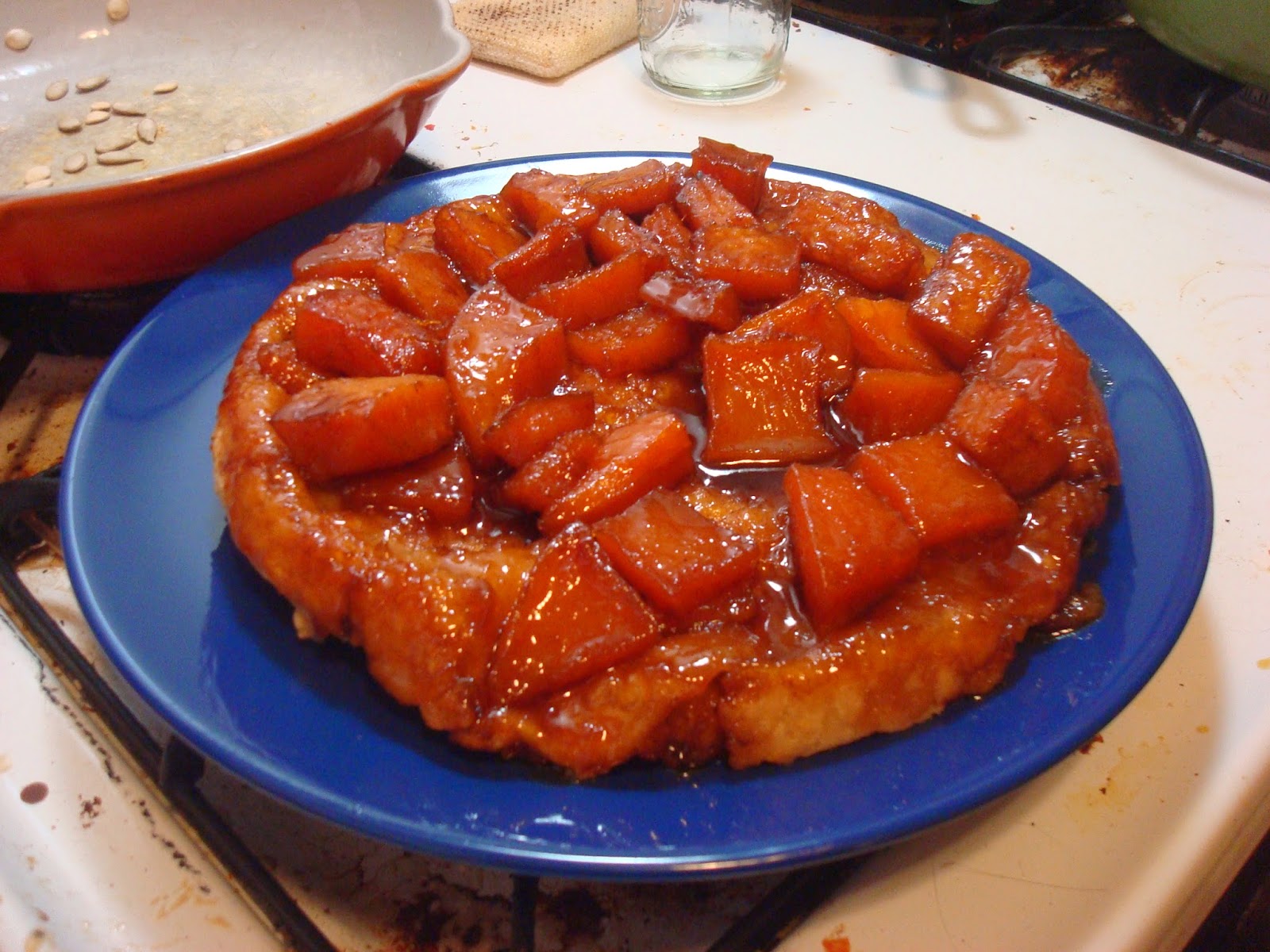 I told the spouse.  He said "let's not do that?" and ":(   I disapprove of this plan"  Miffed, I turned to another friend in gchat, a friend likely to encourage me in my experimentation.  He said "as someone who is not terribly fond of the taste of pumpkin, but who IS terribly fond of the taste of your tarte tatins, I view this as a commander might view rumors of a planned enemy invasion."

Philistines.  Why are my enablers never online when I need them.

SO.  Peel and slice a winter squash/ buy a bag of peeled and sliced winter squash.  You'll need about three cups.  (This recipe is already better than the apple version: THEY SELL SLICED SQUASH IN A BAG: no incessant peeling and coring and chopping for me!)

Preheat the oven to 350 degrees.

Mix 1 1/2 cups flour, 1 pinch salt, and 1 tablespoon sugar.  Slice half a stick of butter into 9- 16 cubes: smash the cubes into the flour mixture.  (Here the goal is to turn the butter into a butter-flour paste, but leave some of the flour in a non-butter paste state, so that later it will form a water paste and make amazing cracker-like layers in your pastry, because flaky pastry is cracker layers.  What I mean is "Don't do a great job mixing in the butter: half-ass it.  Or three-quarters-ass it.)  Add water a teaspoon at a time until you have a fairly reliable dough - not too dry.  Drop it onto a piece of saran wrap, cover it with another piece, roll it into a disc about the size of your pan.  (See step below.)

Because I make a lot of tarte tatin, I do the following step at the same time I make the dough.  Put the other half of the stick of butter in a 7-9 inch oven-safe frying pan. (This is the pan your dough should be about the size of.) Add half a cup of sugar: cook over moderate heat, stirring, as the sugar browns and melts.  When it looks like you've put a handful of Werther's Originals in the pan, add the squash.  You could also add half a teaspoon of pumpkin pie spice: it's better for being simmered in butter.  Cook, stirring frequently, until the squash produces some liquid: about five minutes.  Take the top piece of saran wrap off the dough disc, flip the dough disc into the pan, take the saran wrap off the other side of the dough, tuck the dough neatly into the pan.  Cover up holes with bits you steal from the parts that flop out of the pan, flip bits that hang out into the pan along the dough; do not fret if the crust is not remotely even.

Bake in the oven for about 30-40 minutes: until the crust is golden-brown.  Take it out: while it is warm, put a plate over the top of the pan: invert the entire thing.  Flick the bits of squash that are sticking to the pan onto the tart.  Be shocked at how easy the pan is to wash. 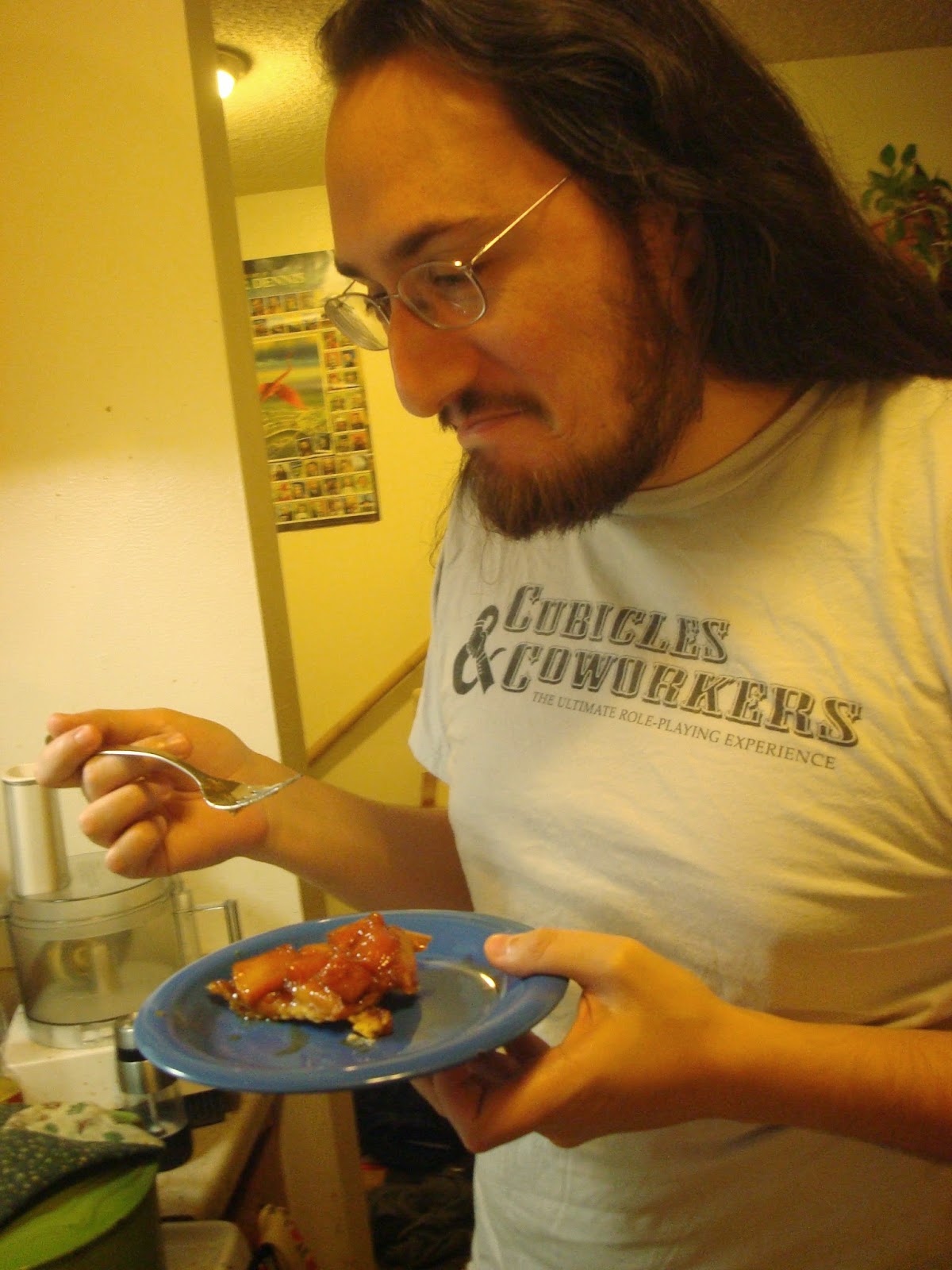 That is a sad face, right?  A definite "no" vote is apparent in that expression.  But guys, this is his second piece.  I am REALLY good at that pastry.  (Crackers.  Remember the crackers rule of thumb.  Or pull out half of the flour mixture, and stir it back in after you've squooshed in the butter.  Now you are a pastry maven.)

The pumpkin is... look, this is when you make peace with your feelings about pumpkin.  It's nicely roasted (I was worried it wouldn't cook through, but it did), and tossed in caramel: this is pumpkin at its peak.  If you keep eating it because it is a beautiful tart with amazing pastry, but are saddened with each non-apple bite, you must acknowledge that you do not really like pumpkin very much.  Sometimes you just finished sharing thirty pumpkin facts with the world, and it's a difficult thing to face.  Sometimes, you've been opposed to pumpkin as a foodstuff from the beginning, and it is easy.

Make it with apples.  Impress your friends.