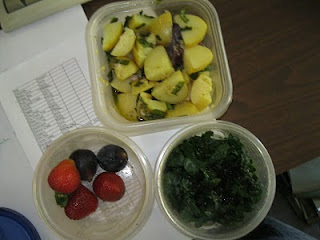 I'm skeptical about diets. (This is a rarely used definition of "skeptical" meaning "violently opposed to".) Part of it is my total lack of impulse control- when I get hungry, I am going to eat something. I will eat all of the things in my lunchbox, and then if I am still hungry, I will eat other things: Entire fennel plants. Acorns. Wayward deer. Unwary coworkers.

I assume other people buy a candy bar or something.

Thus, my lunchbox always contains at least 800 calories and 10 grams of fiber. (And ample 'pocket jerky'- edible but non palatable items.) My challenge this summer was all vegan lunches- it's a little hard to find things that are sufficiently energy dense. I've relied heavily on potato salads.

Potato Salad with Mint and Lemongrass
Boil 1 pound of potatoes until fork tender. (Potato texture is not important in this recipe, except that it be delightful. Thus, this is a good slush recipe for those strangely textured potatoes in your life.) Cut into large chunks. Add three stems thin sliced lemongrass and 1/4 cup chopped mint. Dress with 1/4 cup rice vinegar, 1/4 cup olive oil, and 1 tsp sugar. Salt to taste.
Posted by Janeric at 8:58 PM 2 comments: 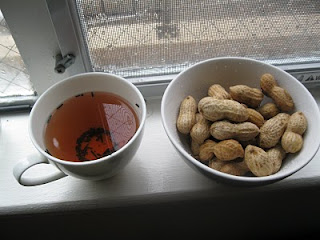 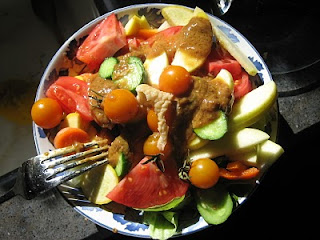 Why yes, that is a piece of chicken skin. It makes your skin beautiful.

I am the worst vegan ever.

This is another recipe garnered from a roommate. I have a lot of these, both because some of my roommates are awesome cooks and because I've had twenty-four roommates. Law of averages, really. Sarlah lived on a salad of chopped vegetables- fresh, blanched, and wilted- with one of several fermented soy products and a wee bit of oil. Of course, this version is remade for my finickier tastes- and as a "last farmer's market of the year" salad.

Rinse one handful really nice lettuce. Or chopped cabbage. Or parsley, kale, chard. I'm not really a follower of the cult of the salad. Green or red leafy thing. Put it in a large bowl.

But the dressing, you ask- what sort of dressing makes this salad a Sarlah salad? Take one tbs miso, two tbs rice vinegar, and one tbs olive oil. Stir together. Put on salad. Eat.
Posted by Janeric at 4:07 PM No comments: 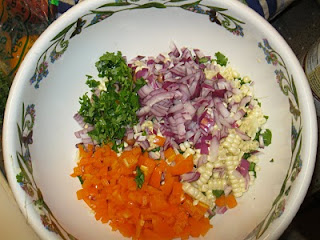 I took the picture before stirring because it was just too pretty.

Take two cans black beans. (Fine, yes, I cooked 1 cup dry turtle beans. HeadLaurel would scold elsewise. However, this is better with canned beans. And easier. See how there are no beans in the picture? That's because they're still cooking. Still.) Drain and dump into a giant bowl.

Chop one red onion, two handfuls cilantro, and one bell pepper. Dump into bowl. Blanch two ears of sweet corn and cut off kernels. Add kernels to bowl. Goodness, how pretty. Stir. Juice two limes. Mix juice with 1/4 cup olive oil, 1 clove grated garlic, and about as much capsaicin source as you can stand. (None is an amount here. I won't judge.) Add to bowl. Stir. Taste. Maybe a little salt?

Serve as a dip, or as filling for tortillas. Or eat it straight. It is important to use a fork when eating it straight, FYI. Particularly if you have poison oak on your fingers. I usually eat about a quarter of this with a half an avocado chopped and stirred in- but if you're serving it to starving hordes and you want to be fancy, add two chopped avocados from the get-go. And maybe a little tomato/peach salsa on the side.
Posted by Janeric at 6:32 PM 1 comment: 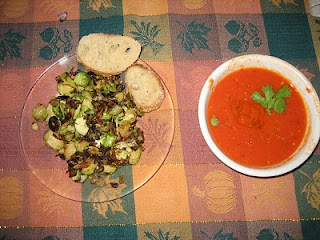 If I ever have readers, y'all will look back on the four month gap in posting and shake your heads. I deserve rebuke!

Regardless, the above was my lunch today. It was delicious. Gaze on it with envy. Recipes follow.

Stir fried brussels sprouts: (15-20 minutes)
Buy a stalk of brussels sprouts at the farmer's market because they are just unreasonably pretty. Cut... fifteenish sprouts off of the stem, remove tough outer leaves, and rinse. Slice lengthwise into fourths. Dice 1/4 red onion. Smash and skin 4 garlic cloves. Heat 1 tbs vegetable oil on medium high heat. (Yes, if this were a real stir-fry, it would be very high heat. You wouldn't have read this far for fried brussels sprouts, and if I'd said sauteed, half of you would have adjusted the temperature downward. I regret nothing.) Fry the onion until the edges are brown. Add the brussels sprouts and garlic. Salt and pepper to taste. (A few red pepper flakes wouldn't be bad here, but I'm feeding a Chilean.) Fry, stirring frequently, until brussels sprouts are tender enough to eat. (7 minutes? You may need to add more oil.) They usually get a little burned when I make them, but I like that. I also like them crunchier than my Midwestern parents- if you don't want your vegetables fighting back, you might want to splash a little water in the pan and cover them for the last minute. Eat

Vegan Cream of Tomato Soup.
There are two tricks to this soup. One is the mirepoixesque base of sauteed red bell pepper, yellow onion, and cilantro. (My Puerto Rican roommate taught me this. Her stews were excellent, though a bit heavy on the chorizo and bullion cubes.) The other is the addition of good quality bread partway through the cooking process. (A cookbook taught me this. Such is life.)

Take two pounds really good tomatoes. Boil water, immerse tomatoes for fifteen seconds, and then remove skins and stem scar. Do not squeeze out seeds and juice. When it's not the best time of the year (tomato season!) you can use good quality canned tomatoes (I think they're 22 ounce cans). Cook them longer to remove the canned taste, and use as little of the canning liquid as seems reasonable.

Chop one yellow onion, one red bell pepper, (Or orange. That would be awesome. In fact, I used a couple of red jalapeños, the product of another impulse buy at the farmer's market. Congratulations, you've found the driving force in my culinary experimentation.), a bay leaf, and a handful of cilantro. Saute in 1 tbs vegetable oil in a large heavy pan until onion is soft and translucent. Sprinkle with salt. Coursely slice in peeled tomatoes, 4 smashed and peeled cloves of garlic, and 2 slices good quality white bread, torn into 1 inch pieces. Bring to a simmer, and let bubble away for ten minutes. Cool slightly, and then pulse in a food processor or blender (in two or three batches) until slightly chunky or very smooth, depending on your preference. Return to heat, warm slightly, and then thin as needed with broth, white wine, beer, or water.

If you wanted to have the analog of a grilled cheese sandwich with this, I'd steer away from vegan cheese which has a distressing texture when warmed. Try mashed avocado on toast- perhaps with some toasted sesame seeds.
Posted by Janeric at 5:34 PM 1 comment: