This was supposed to be the Roman version of a Burmese tea salad, but then my husband convinced me to add an avocado. 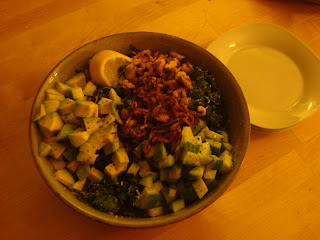 THE first time I tried a Burmese tea salad, I immediately started trying to figure out how to make them at my house all of the time.  They are amazing: you should go to a place that makes them and put said salad into your face at the first possible opportunity.

BUT I could not figure out how to buy high quality fermented tea leaves.  I gave up my hopes and tempered my love for these salads with the quite unreasonably long wait outside of the local Burmese place.  Very small tragedy.

HAPPILY, I started reading Apicus - a cookbook from ancient Rome. (There are a lot of great vegetable recipes. Every recipe marked "for vegetarians" has calf's brains in it. There are no desserts. Salt is always added as a brine.) What if I took some traditional Roman vegetables, and added a Burmese twist?  I could still use the fried shallots (fried shallots are the best) and the chopped romaine (for crunch: a salad is still delightfully crunchy if it is 10% romaine instead of 80%. Pro tip.) I could use kale instead of tea leaves, I could replace peanuts with walnuts, I could use parmesan instead of fish sauce (yes I know garum is very very Roman but it's a salad few people want fermented fish on their salad.) and cucumbers instead of tomatoes: it would be great!

THEN the spouse convinced me to add an avocado. It was an amazing salad entirely because of the avocado. You know what makes it more amazing? Abandoning the Roman thing almost altogether, and using chopped cilantro or mangos or tomatoes, replacing the walnuts with sesame seeds and chopped peanuts, and adding olive oil.  Olive oil makes most things better.

Serves 4
Slice one large shallot thinly, and place over medium heat with a little oil.  Fry until crisp, stirring frequently to prevent burning.  Add a little salt.  This takes about ten minutes.

Tear one bag or one and a half bunches of fresh, crisp kale into bite-sized pieces.  Salt. Microplane about an ounce of parmesan cheese onto the kale; add a tablespoon of olive oil and toss gently so every leaf has a little bit of cheese on it to make up for the fact that it is not a carefully fermented tea leaf. (you could also use soy sauce or Bragg's or nutritional yeast, maybe.)

See how I've divided the ingredients into equal pie-chart slices? Do that, it looks nice, and then you look real smooth mixing it at the table.  You are going to add one or more of each of the following ingredients:

A small romaine heart, chopped (this is enormous; you may need to excavate a small pit in the kale for your lettuce.)
A half cup to full cup of a sweet thing like mangos, apples, pears, peaches, peppers, or tomatoes.
A chopped avocado
A quarter cup of chopped herbs like cilantro, green onions, or mint (this is optional.)
A quarter cup of crunchy nut-like things such as peanuts, walnuts, pumpkin seeds, or sesame seeds.

Put the fried shallots in the center to disguise how badly the segments connect.

Look how pretty that is!  So pretty!

Now squeeze a lemon over it and stir it up and serve it.
Posted by Janeric at 9:53 PM